Creatingremarkableschoolswhere no child is left behind

Beckfoot Trust is an organisation that links a group of local Bradford schools together so that they can collectively improve the life chances for young people within their schools. Our aim is to create a group of truly remarkable schools each with a genuine comprehensive intake. They will be wonderful places for young people to learn and grow up in. We want to make a difference. We want to create something special. 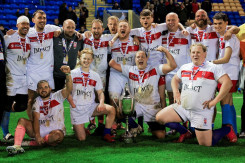 Harvey is 19 this year. In his time at Beckfoot, Harvey was a great student who worked hard. He was a young man who always loved rugby and followed it with a passion. Harvey had a stroke when he was born and was diagnosed with cerebral palsy down his left side at the age of two. After leaving school he struggled through Covid as many of us did. Harvey turned to his Dad for support (Dad is a rugby coach). Harvey asked if he could get involved in Physical Disability Rugby League (PDRL). Such was his talent that very soon Harvey found himself at Leeds Rhinos and there being forwarded as a name to be considered for the National team. It was this year that Harvey got the call up to the England National Team which he described as an incredible moment. As a World Cup winner and Leeds Rhinos player Harvey really wants to show what PDRL can do for young people, now after playing in every game at the Word Cup Harvey is real inspiration.

Harvey played in all the round robin games at the PDRL World Cup this October, he scored a try and played in the World Cup final England team beating New Zealand 42-10. He even captained England for a short period which was dream come true!

Harvey visited Beckfoot just after the World Cup to meet up with some of his old teachers, talk to some of our Table Cricket team and talk to all of Year 11 in assembly. It was very generous of Harvey to take time out from University studying Sports Journalism to come back to visit us at Beckfoot, he certainly has inspired his fellow Beckfooters. 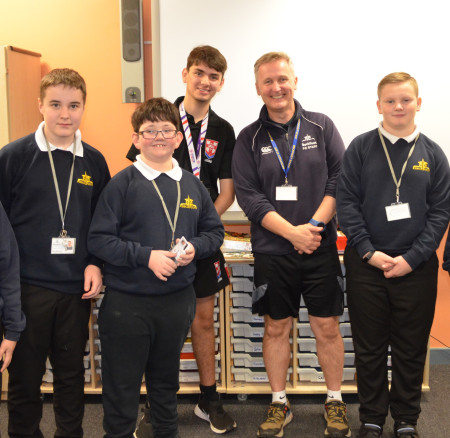 LINKS:
Click here or on the YouTube link above to view the full interview >
Click here to find out more about Physical Disability Rugby League >
The World Cup final match is currently available to view on BBC iPlayer >

Back to all news